Some family friends have invited us to their daughter’s wedding.  It’s a big affair. Swanky hotel, outskirts of London. My style for the occasion is a three-piece suit. Light brown with stripes, like an ash coloured worktop. A silk maroon tie sits neatly behind the waistcoat.

On arrival we are requested to take a family picture. The photographer’s first duty it seems is to capture who has attended. I put my best side on, it’s not the digital camera age yet.

This is a new era of weddings. We don’t all need to rush to the banqueting suite straight away. Instead we are welcomed with canapes on the roof terrace right next to the swimming pool.  END_OF_DOCUMENT_TOKEN_TO_BE_REPLACED

Away from the hustle and bustle of Regent’s Street, where rush hour reminded me of a normal day on the roads of Delhi, a left turn brought me to the tranquil entrance of Asia House.    As I gathered pace up the winding stairs I encountered the subtle noise of this evening’s audience attending “Cracking Up – The Evolution of British Asian Humour“.

Explaining humour is a lot like dissecting a frog; you learn a lot in the process but in the end you kill it.

Re-iterating the wise words of Mark Twain from the host for the evening, Sathnam Sanghera, kicking things off and introducing members of the panel.

Those members of the panel included writer/producer Anil Gupta (Goodness Gracious Me, Kumars at No. 42 and Citizen Khan); Saurabh Kakkar (Head of Development at BBC Comedy) and Shazia Mirza (renowned stand up comedian).

What better way to kick off an evening of humour then to have a little stand up comedy, performed by Shazia. Birmingham (the posh part) born Shazia tried her might to rally up a rather subdued audience, and I would like to think she almost got there….“tough crowd” was her choice of words. The theme of Shazia’s jokes centered upon the Asian stereotypes we have all come to associate ourselves with. Yes those jokes still make us chuckle but the audience would later gain an interesting insight from the panel about their honest thoughts.

The Panel of Experts Voice their thoughts!

So some snippets of what was discussed…

At what point did you decide to go into comedy, given it’s not the most traditional Asian profession?

….”well I’m not the most traditional Asian“…responded Anil Gupta, drawing laughter from the evening’s audience.

Saurabh Kakkar worked at a chemical plant so had a total change of career, taking a job to produce LIVE comedy.His family knew his career in engineering wasn’t going to last so it didn’t come as a major shock when they found out about his desire for a change.

Shazia started life as teacher in Tower Hamlets but always had a passion to write comedy, so decided to attend a writing course at City & Guilds.

“…at the end of the course the teacher asked us to write about something you really hate and be really truthful. So I wrote about how I had so much facial hair and how it was ruining my life. How I tried bleaching it, shaving it, plucking it, lasering it”.

..”when I stood up in front of all the people, everybody started laughing”…This inspired Shazia to join the circuit and start performing at comedy clubs… “I really love that feeling of people laughing”..

How do you guys feel about Goodness Gracious Me?

Saurabh Kakkar: “My Jewish and Indian friends could relate to this..”

Anil Gupta: “We set out to make a funny show. When I was growing up it certainly wasn’t very cool being Asian.When I was working at the BBC, there was a rumour going around that they were developing an Asian sitcom. I was outraged they didn’t ask me as I was Asian. I went to see my boss, said it should be a sketch show and he said go away and do something. We put on a one off live show, called in close family”. <we know the rest>

Is there something intrinsically funny about British Asian Culture?

Shazia: “No, the Jews are hilarious. They have a history of being able to laugh at themselves, whereas as the Asians don’t. On the comedy circuit there are only 5 or 6 Asian comedians. There is no Asian Comedy, just comedy and Asian people doing comedy”.

Will British Asian comedy just disappear as Asians integrate and people like stop having these debates?

Anil Gupta: “I hope so. Hopefully as time passes and people evolve it will become a redundant phrase.

We would have evolved as a society when people don’t question a brown person’s right to do a joke an Englishman”.

The venue and ambiance really set the scene for the evening and the panel on show offered vast experience on the comedy front. Many of the audience like myself may have been expecting a conversation focused on the emerging future British Asian Comedy, however what Shazia said really summed it up for me – that she would rather do jokes about general observations as opposed to Asians in particular. So many more interesting things to talk about then just being Asian.

I have watched the likes of Paul Chowdhry and Russell Peters over the past few years, laughed at the stereotypes from shows like Goodness Gracious Me and Citizen Khan, but what stereotypes will exist in 20years time? Personally I would like to see more Asians involved in comedy, on a general level, whether it be in the mainstream or stand up. But for now, I will continue to laugh at the suitcases on top of the cupboards and TV remotes wrapped in cling film. 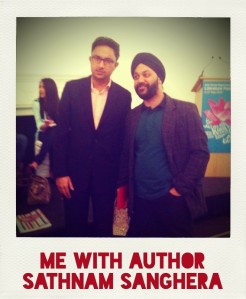 This week sees the start of the Asia House Bagri Foundation Literature Festival, running 6th May through to 21st May.

Visit the link above to see the exciting workshops on offer throughout the duration of the festival, featuring acclaimed authors from around the globe.

Potatosandwich is happy to announce that it will be covering the following workshops for it’s kind audience of readers. So watch this space!!

Asia House continues its popular British Asian evenings with an entertaining look at Brit-Asian humour, its development as a mark of cultural identity and how it has evolved since Goodness Gracious Me.

Sex is entwined with religion, tradition, gender and politics across Asia. It makes the perfect lens for examining the region’s complex social landscape. This evening, we take a serious but entertaining look at dating, love, marriage, divorce and LGBT culture in the Middle East, India and Pakistan.

Subscribe for updates for the release of my first novel

"Me Simple Categories" - Pick one!

My Posts by Month